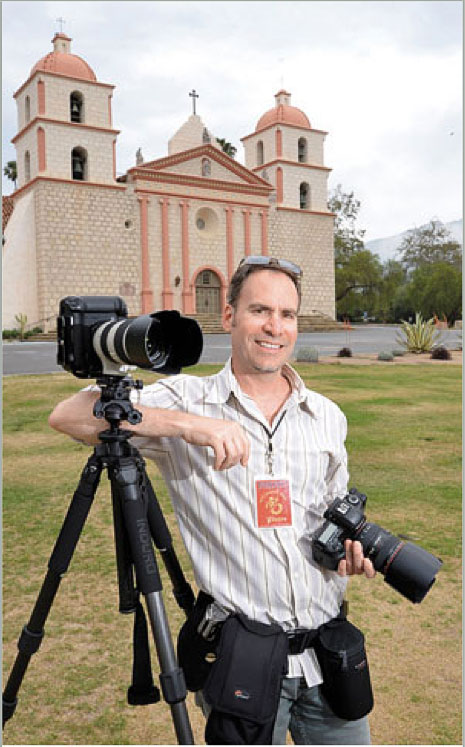 Above is a 2014 photo of A. Arthur Fisher as the official Old Spanish Days photographer, taken by the Santa Barbara News Press (credit: Steve Malone) for an article about Mr. Fisher's Fiesta coffee table book. This is an excellent photo for several reasons. First, the backdrop choice is relevant and interesting. Yet, there are no significant features of the mission which interfere with the main subject and vice versa. The main subject was lighted by one simple off-camera strobe. The mission's door is centered between Mr. Fisher and his camera. It's an overcast day, so there are no hard shadows other than the modest shadow created by the strobe, which adds some gentle depth to Mr. Fisher's face and opens up the shadow detail in his black camera gear. There's a beginning, middle, and end to the story. The exposure is excellent with flattering flesh tones.

Although initially educated in Mechanical Engineering and later Network Security, Mr. Fisher now delivers a rare mix of talents. He is the owner and founder of In Color. He has been professionally involved in graphic design, publishing, digital fine art media and photography for over thirty years. His numerous certifications in digital publishing and digital media have only aided his expertise in his award-winning photography. Mr. Fisher served for several years as Santa Barbara's official Old Spanish Days photographer and currently enjoys serving as the house photographer at both the Santa Barbara Bowl and historic Arlington Theatre.

Having photographed 700 events in Santa Barbara alone, Art has lived here for 35 years, enjoying all the creative energy that this beautiful place has to offer. See his photography as featured in publications all over the world. See his Amazon Author page here at https://www.amazon.com/author/artfisher

All images on this site are for sale and available for licensing. (Releases are available or can be obtained for many images.)

All images on this site are protected by the registered U.S. and international copyrights of A Arthur Fisher.
Permission required for any capture or reuse. Mr. Fisher strictly enforces his copyrights. Read more...