I was very pleasantly surprised by Sarah McLachlin's performance the other night. Of course, I was familiar with many of her top-hit songs, but to see her radiant performance live instantly made me fan. In addition to her talent as a singer-songwriter, she also demonstrated a personable character, sharing some humorous stories about herself. What a beautiful woman.

I was able to shoot, kneeling in front of the first row on the floor, so I had ample opportunity to capture her elegance during the first three songs. Glad I had knee-pads with me. See the photos on sbbowl.com here.

It was a pleasure to see Widespread Panic at the Arlington Theatre. This historic jam band didn't disappoint. I was able to shoot the 2nd and 3rd songs from front of stage, so I got some decent shots. The only problem was that the patrons rushed the stage, basically pinning me to a single location. I would have liked to switch sides at least once, but alas, that would have been even more impossible than what it took to exit my front row spot with my camera gear, when I was done shooting.

Read the review and see the photos on thearlingtontheatre.com

One of my favorite lecturers of all time returned to the Arlington Theatre as part of the UCSB Arts & Lectures program. Malcolm Gladwell is not coincidentally also one of my favorite authors. His carefully researched, historical accounts are meticulously organized into compellingly interesting stories. The result is presented as a social psychology lesson guaranteed to teach us something important about life.

Read the review and see the photos on thearlingtontheatre.com

Opening this country show at the Santa Barbara Bowl for the country guitar virtuoso, Hunter Hayes, were duo team Dan + Shay. There was quite a lot of action on stage for both acts. Unfortunately, I was restricted from shooting at the soundboard. I shot most of the show with a 300/f4 and a 70-200/2.8, both with teleconverters to add reach.

The shots from the Hayes act are restricted by the artist management, so I've used a shot from Dan + Shay to denote this story. You can see the entire gallery on sbbowl.com here.

James Taylor is one of the most successful singer/songwriters who still tours. I've seen him now a couple times, and for both, I've been able to shoot. Both times have been at the Santa Barbara Bowl, and both have been from the soundboard. Shooting from up there obviously creates other limitations. This time, I brought a newer 400/2.8 lens (L IS II) and coupled it with a 2X teleconverter (II). This creates a pretty darn clean 800mm f/5.6 reach, so I was able to get right up to him. For being constrained to right behind the soundboard, shooting with that lens combo isn't so bad. Of course, there was the problem of not being able to move to minimize the presence of the mic stand or water bottle.

These photos are restricted by the artist management, so I can't place one on this website, but you can see what I got by visiting the Bowl's website here at gallery.sbbowl.com.

Bryan Ferry kicked off the Santa Barbara Bowl's 2014 Concert Season by putting on a great show. Opening for him was Dawn Landes, who's music I found to be easy and compelling. I was able to shoot the opener while kneeling, front of stage. For Ferry, I did the same for three songs, then was able to shoot the rest of the show from the "wings" off the side of the floor. I used the opportunity to shoot a panoramic image from a new location. 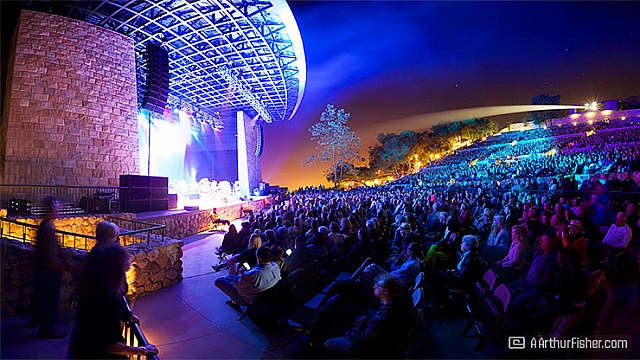 To see the images, check out the gallery on gallery.sbbowl.com.

Aziz Ansari performed to a giant crowd of millenials at the Arlington Theatre, providing plenty of great laughs.

Shooting conditions were pretty good. The lighting was rather dark, but both performers were nicely animated. See photos of Aziz and cohort, Joe Mande on thearlingtontheatre.com.

SBIFF - Before Midnight at Arlington

I was really excited to see the movie Before Midnight, when it was screened at The Arlington Theater for the 2014 SBIFF's closing night. In attendance were the two stars of the Before trilogy, Ethan Hawke and Julie Delpy.

Also present was director Richard Linklater, who also co-wrote the entire trilogy with the two main stars. I remember seeing the first movie, Before Sunrise, a dozen years ago, and I was anxious to see the inevitable follow-up, which was released as Before Sunset. The trilogy spans nearly twenty years in the life of the two protagonists, and it's an R-rated account of a relationship/love story, which is mostly clever dialog and banter.

See photos of the three principals on thearlingtontheatre.com.

This was my second opportunity to shoot the fluffy legend of comedy, Gabriel Iglesias. Mr. Igesias always performs with a hand-picked group of other Comedy Central comedians. This year, Gabriel has lost some serious weight, but he's lost nothing comically.

I like shooting "Fluffy" because he always makes the show personal, like he's sharing a personal part of himself to his audience, half-joking about some rather serious issues that have been confronting him lately.

Along with Iglesias, we saw performances from Martin Moreno, Alfred Robles and Santa Barbaran native, Lance Patrick. See the photos and review on thearlingtontheatre.com.

What an absolute privilege it was to shoot one of the most legendary comedians of all time! A few nights ago, Bill Cosby came to town and performed to a near-capacity crowd.

Mr. Cosby was wearing a somewhat odd sweater, which from a purely visual arts point of view, was not optimal. He did, however, utilize a few simple props, which added a little bit of dynamics. Most of the show he was seated, but he did stand for a bit and even once lay flat on the stage to emphasize a particular story.

See the photos and read the review on thearlingtontheatre.com.

Published in Photo Blog
Read more...
Page 3 of 4
Powered by In Color
Copyright © 2020 A. Arthur Fisher