A good time was had by all who saw Jack Black and Kyle Gass perform with their band, Tenacious D, at the Santa Barbara Bowl. The stage props were not G Rated! But the shooting conditions were very good, without too many people in the photo pit. There was good lighting and plenty of space to move around.

Check out the full photo gallery on gallery.sbbowl.com

I was pleasured on this year's 4/20 night to shoot friend, Dawn Sherry's "all-chicks" band, Mynx. Their local gathering of hard-core fans stuffed the Wildcat Lounge. Mynx's repertoires includes covers from some of the best female rockers and great bar room party music from the 70's through present day. Pat Benetar, Blondie, Ramones and Black Keys were some of the music I remember most. They squeezed in at least one original song and included a token-male sax player on a few others.

See the gallery on my site here.

Florence and her machine played a powerful set tonight. Her strong voice was only out numbered by her angelic wit. During the first three songs (which I was allowed to shoot), Flo donned a beautiful cape. She spun and leaped around barefoot on the carpeted stage, twirling the cape like a giant set of graceful wings.

Lens flare from the bright lights behind her, shining towards the crowd, pushed my camera's sensor with high-key back-lit star-bursts. Shooting was difficult to say the least, but it did provide a rare opportunity to capture something very unusual.

Blood Orange opened the show; he was quite a clever soloist with a mastery of vocals, keyboards and guitar, accompanied by a drum machine.

What an amazing way for the Bowl to start off the 2012 concert season! Radiohead played to a crowd of zealous fans, who sold out the venue in just twenty seconds. There was so much lighting on stage that I had to use my fisheye to capture the multitude of video displays that wallpapered the entire pavilion.

Thom Yorke now sports a pony tail, still with his scruffy neck, but now a little bit more gray than the last time I saw him.

Laura Swift wrote an excellent review of a show I covered at the Arlington Theatre last week. I was still a bit sore from surgery, so I was unfortunately unable to see the entire show. In any case, it was quite a treat for us to see Wilco to play such an intimate venue as the Arlington considering last time they played in SB, they filled the Santa Barbara Bowl.

See the review on thearlingtontheatre.com 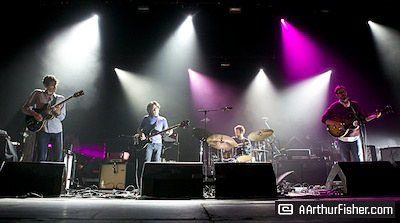 In a rare treat, local favorite, Jackson Browne, played the Arlington Theatre in a solo acoustic performance. The well-seasoned performer had a large quiver of acoustic guitars as his backdrop, seemingly haphazardly selecting a particular for each song. Occasionally, he resorted to his little keyboard setup on stage, so you could see his whole body through as key jammed away on the keys.

The show was surprisingly entertaining, especially considering it was just a single musician making all that music. Browne singled David Crosby out of the audience and praised him as a key mentor, enticing him to duo a song or two. That was a special treat!

Read the excellent review by Jim Youngson, and see my photos at thearlingtontheatre.com

Santa Barbara Local, David Crosby and long-time collaborator, Graham Nash, rocked the Arlignton Theatre last night with a double set of their long list of 60's and 70's favorites. Read the review by David Palermo and see my photos at thearlingtontheatre.com

Back to Santa Barbara for the first time in may years, Primus can to play for its fans at The Arlington Theatre on Oct 21, 2011.

For most of the show, front-man, Les Claypool, and guitarist, Larry LaLonde, were in dark shadows, making this a difficult act to photograph. Adding to the challenge was the fact that there were giant bass stacks on the sides of the stage, blocking the view from the front corners, where I like to shoot. In order to get some decent material, I was related to shoot from the back and balcony for most of the show.

See the gallery and review at thearlingtontheatre.com

A bit frail but not yet passe, Mr. Gordon Lightfoot treated Santa Barbara to a reprise of his significant career. I photographed him at the Arlington Theatre on Nov, 9th, 2011.

See the gallery and the excellent review by Jim Youngson at thearlingtontheatre.com.

Closing out a record concert season at the Santa Barbara Bowl on October 27, 2011, was deadmau5, a top-notch D.J. from Canada. Described as a progressive, electro and house musician, deadmau5 filled the strange with all his lighting gear and perched himself atop it all.

Starting off with Sofi, there were five acts on Thursday night. Next came Jason Bentley who was followed by Le Castle Vania. By this time, it started getting darker, and when Feed Me came on, the lights came up. It was pure night for deadmau5, who did part of his act with live female vocals.

It was quite an evening for the photographers, who got to shoot the entire show from the right back corner of the floor. I shot thousands of images, and posted some really cool stuff on the Bowl's website at gallery.sbbowl.com